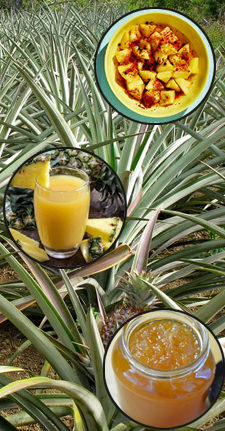 Pineapple (Ananas comosus) is one of the most popular tropical fruit. It is a good source of vitamins A, B and C, calcium, magnesium, potassium and iron. It is also a source of bromelin, a digestive enzyme.

The pineapple varieties ‘Kew’ and ‘queen’ are extensively grown in Manipur. The fruits of Kew variety are big size, broad and shallow eyes, light yellow flesh, almost fibreless and very juicy. On the other hand, the fruits of queen variety are rich yellow in colour, less juicy than Kew, crisp textured with a pleasant aroma and flavour.

Consumption of pineapple decreases the risk of obesity, diabetes and heart disease. It also promoted a healthy complexion and hair. It is a good for the digestive system and helps in maintaining ideal weight and balanced nutrition.

Pineaple may be consumed as fresh, canned, juiced and are found in a wide array of food stuffs-dessert, fruit salad, jam, yogurt, ice cream, candy, etc. Pineapple can also be spray dried in the form of powder.
Canned pineapple is consumed throughout the world. It increase the shelf life and makes it available during off-season. Dried pineapple chunks is used as an ingredient in confectioneries, breads and desserts. They are generally added in processed foods such as snacks including biscuits, cookies, chocolates, bread, yogurt, fruit jelly, breakfast cereal, health foods. Pineapple can also be dried as slices.

The crop has been undergoing the process of certification under standards laid down and administered in India by APEDA i.e. National Programme for Organic production (NPOP) since 2016. Fourth year organic certificate has already been obtained for an area of 600 ha. of organic pineapple under MOVCDNER Phase-I and another 1000 ha of area has obtained 1st year scope certificate under MOVCDNER Phase – II.

Variety Grown and Availability in Manipur